Spending an evening with Oromos

Today was such a pleseant day, i was invited to the Oromo community celebration of the beginning of the new Georgian year 2013. Oromo are the Koshian people of the State of Ethiopia. they are part of the Koshian civilization which Nubians belong to. so they are my cousins.
i have been introduced to the Oromo struggle in 2009, through my work in refugees' issue in Egypt. one of my colleagues is a great man and he is from Oromo. he taught me about the struggle of his people against the central State in Ethiopia, actually they are sharing some problems with us, as Nubians, the suppression, neglection from the central government and cultural war to omit their deep rooted culture. 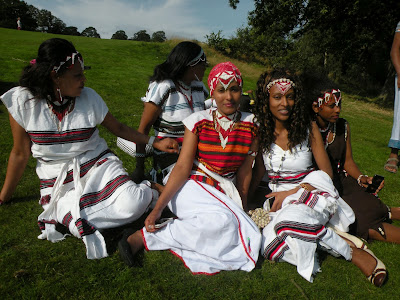 Oromo like many ethincities in Africa suffered specially after the colonization, because the colonizers built a wicked conflict in the African context which is the supremacy of a certain people or culture on the rest of the inhabitants of each country, after drawing  unnatural borders. that was the case of Rwanda for example and that what lead to the genocide.
this wicked idea was entrenched through all means, political, social, economic and developmental.
being in the trench of the unprivileged part means suffering by all means,  no education, no health care, no development, complicated economic situation and for sure political prosecution if you dared to talk about your people suffering.
it is very problematic that the newly established states in Africa had hard time with the notion of nationalism, that they tried to embrace just one identity, and by that they completely deviated from the African tradition of respecting multiplicity. Africans suffered from the unnatural borders which cut some ethicities into pieces like the Nubian comminty when British cut Nubia into two part by the line of 22 north, which made some Nubians Sudanese and other Egyptians. even in the same states, some governments adopted very selective attitude in applying the notion of nationality, they made a check list and if you do not fit, you will suffer.
and Oromo do not fit, they are simply different.

that what happened to my Oromo-ian friend, he left the homeland, and he is a refugee here in Egypt, suffering from hardship of being a refugee in unwelcoming state like Egypt. but when you see him talking about his struggle you will only see the pride, that black pride which never vanishes .

Oromo people are struggling hard to be recognized  and to have their human rights respected.
the Ethiopian state must stop its suppression to the Oromo people.

respecting different people is essential, multiculturalism and persevering multiplicity is the pillar of any state.
finally sometimes it is important to see ADhoc, this is a video showing how Oromo raised their flag in the last African cup for football

Know more about the Oromo struggle