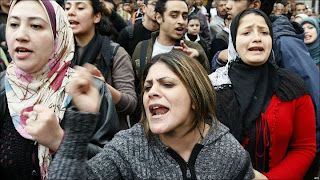 In my last post women in the revolution I classified the women in the Jan 25 revolution according to how covered they are, but I thought that the non veiled and the causal veiled and the ultra religious veiled constitute different categories .
However when a fellow young feminist expressed her astonishment about the role of the veiled women in the revolution and that there broke many taboos socially and religiously , I was offended because she had a very orientalist view of feminism, that veil is a constraint on the agency not only the sensuality and sexuality . I was also offended when I was doing an interview with international journalist and she asked me if I was veiled or not because I am an Islamic feminist.
As I felt offended I felt is about time to talk about veil, although it is a very old topic, we can debate whether it is religious obligation or socially and culturally obligated custom.
I can talk on my own experience I was veiled when I was 15 by my own free well, then I was introduced to the literature of the Islamic feminism in my mid twenties and I started believing that the veil is not religious obligation and that belief was strengthened when I meet my mentor Prof Amina Wadud who practice in her life wearing and unwearing the veil according to the situation, so she accept that it was stated in Quran and Sunna but they are not an obligation we will be accountable in front of Allah.i think it is so naive to think that a women is lacking agency only for wearing veil or she is liberated only for unwearing it.
I am still wearing my veil, it might look awkward because I lost the valid justification of wearing it which is the religious and I can fight, if I want to overcome the social obligation but I feel really that I am prevented from doing or being whatever I want and add to this that I knew my womanhood with a veil on my head.
sometimes i hate it , sometimes i feel i am claiming my rights to choose what i want with it , but in everyday i wish i would not be classified by an inch of clothes

update
there is a reply from my fellow young feminist i mentioned Maha el Aswad on this link
Posted by Fatma Emam at Monday, February 14, 2011

hi browny
hijab isn't something new to feel confused about it. It's something we acustomed to deal with although as for me I think it's something to b proud of as +ve thing not -ve one.
if u remember when i worked in AMECO. It was american company but there was nothing to do with such deffrentiation .there were women wearing neqab.Men with long beard. they care only for productivity in sale. I think this what should be and there is no need to b disturbed with the refusal of hijab however they had to respect and deal wiz u as an islamic femminist

Hi Fatma, I am a student in South Korea and I am writing a thesis on the role and prospect of women in the Egyptian Revolution. As you may know, it is difficult to find any kind of document to complete my thesis and I came across your blog during my research. I would like to have your permission to use some of your comments in my thesis. You will of course be quoted accordingly. Your entries in your blog provide me great insight for my thesis and I am really happy to have found it. It could really be useful for my thesis. I am leaving you my email address in case: seulgielim@hotmail.com
Thank you.